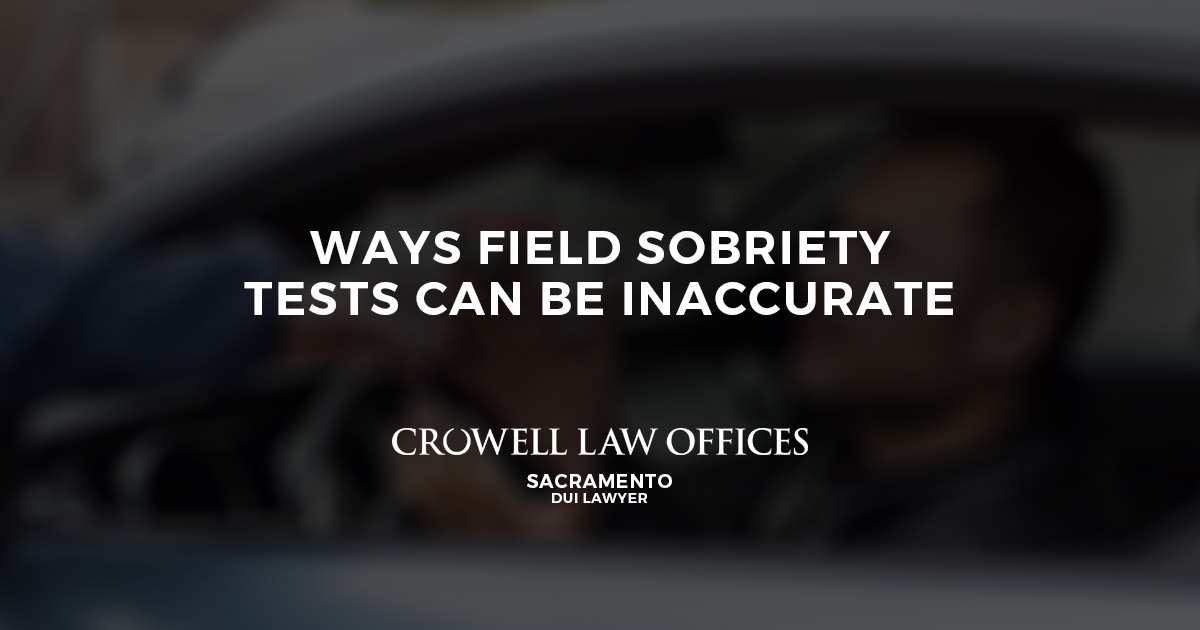 Posted at 21:42h in Blog by Crowell Law Offices
Share

Many people believe that once a police officer has pulled you over for a DUI, you’re as good as convicted. We’re not advocating drinking and driving, but we do believe that people can be falsely accused or wrongly convicted.

In many cases, people will plead guilty to a crime they didn’t commit simply because they don’t know how to fight it. If the field sobriety tests indicate intoxication, they believe the court will take the officer’s word over theirs.

Yes, the court does hold in high regard the word of a police officer, but not to the point that your statements are meaningless. If you don’t believe the field sobriety tests were accurate, you can work with a criminal defense attorney to get the tests thrown out, or at least to cast doubt as to their accuracy.

How Can Field Sobriety Tests Be Inaccurate?

Let’s examine a few of the ways that field sobriety tests can prove inaccurate.

Breathalyzer tests are designed to test the alcohol concentration in your blood, but they do this indirectly by measuring the amount of alcohol in your breath. These tests are known to be inaccurate because they can give false readings for various reasons.

Some perfumes and other chemicals in the air can throw them off. How hard you blow into the device can also give false or inaccurate readings.

The walk-and-turn test is designed to measure your balance because intoxicated individuals often lose their balance and perception abilities. This test is extremely inaccurate as many different things can throw off a person’s balance, such as uneven pavement, natural clumsiness, certain footwear, and the inability to see at night.

Another test designed to measure balance and coordination, the one-leg stand can be difficult for many individuals, and it has nothing to do with sobriety. Many people naturally lack coordination. There are multiple reasons, aside from intoxication, why people can’t perform this type of test.

The HGN test measures certain jerky eye movements that supposedly indicate a person’s level of intoxication. However, there are other reasons that a person’s eyes can perform the jerky motion that police officers take for drunkenness.

For instance, high levels of caffeine can cause the eyes to jerk, which can make you appear intoxicated when you aren’t.

Secure the Services of a DUI Defense Attorney in California

Reach out to a DUI attorney at Crowell Law Offices to discuss your case during a free initial evaluation. Dial 916-303-2800 or fill out the online contact form on this page.