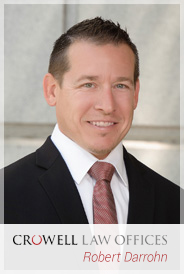 Robert Darrohn is a Trial Attorney with Crowell Law Offices, having earned this position through hard work and proven results. First contracted to help with calendar conflicts, Mr. Darrohn quickly became indispensable when he returned with dismissal after dismissal. Since his employ he has shown nothing but a fighting spirit and natural success, having obtained dozens upon dozens of deals resulting in reduced charges or dismissals. The practice of criminal defense is a calling and Mr. Darrohn knows that this is his calling. This calling has developed through his long-standing commitment to helping others that began long before he became an attorney. After graduating high school he enlisted in the military and served four years in the United States Air Force. At the end of his enlistment and upon graduating from the University of California, Los Angeles he worked as a counselor for at-risk youth in the Los Angeles area. The non-profit residential program provided an alternative to juvenile hall for youth that were currently in the penal system. Although most people only see the crime, Mr. Darrohn sees people that have a right to equal justice and due process. His passion and commitment to a strong work ethic shows through the individual service he provides to each client.